Curing and vulcanization are one of the most complicated subjects in rubber compounds. The methods used for cross linking of elastomers is so much important for elastomer polymer (heat resistance, compaction set, module, flexibility, mechanical weathering). It is in a complexity whose mechanism is cannot be explained properly related to cure and cure agents on the world. . In brief, we will talk about early initial point one of the most recent developed curing (cross Linking) methods.

Charles Goodyear, in 1840, has distinguished vulcanization, by mistake, that is the most important event in Rubber industrial, by dropping down one of the sulphur samples from his hand on the stove, during continuing his studies. He tried to take out the Rubber part quickly considering the part fallen on the superheated stove could be melted. Unfortunately, the rubber didn’t melt, in contrary converted to a hard and elastic form. So, he has found the answer he’s been searching for years. It has become possible to see the answer that was hidden in the part dropped on the stove, he was searching for, in fact by means of knowledge and experiences he obtained during his studies after long years of studies.

Cross linking (Vulcanization) is chemical recombination established by the proper activating agent and accelerator under the conditions of industrial need within itself in polymer chains or with the polymer chain close to itself. Elastomer long chain molecules is converted to a three-dimensional elastic network, by combining (cross linking) at certain points along the molecular polymer chain. The sample for this cross linking is shown below. 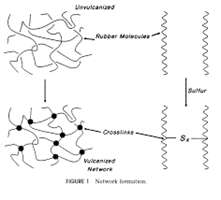 Cross linking (Vulcanization) is chemical recombination established by the proper activating agent and accelerator under the conditions of industrial need within itself in polymer chains or with the polymer chain close to itself. Elastomer long chain molecules is converted to a three-dimensional elastic network, by combining (cross linking) at certain points along the molecular polymer chain. The sample for this cross linking is shown below.

Sulphur is the most frequently used agent to vulcanize rubber. Akrokem presents a broad range of sulphur to meet specific applications:
• •S8 Sulphur is dispersion having an extremely thin average particle size of 15 microns in NBR, SBR, NR latex systems, processed with magnesium carbonate (accordingly ash content) to increase dispersibility and decrease caking.
It was proven that the easiest and lowest cost way of manufacturing rubber products having perfect elastic properties like especially swing, tearing and dynamics, is the cross links created in the rubber with sulphur.
In a typical rubber mixture, smaller amounts of accelerator and greater amounts of sulphur are used to increase curing speed and efficiency. (1.5-3.0 phr) sulphur links S-S cross links in the form of 3-8 atoms. Sulphur in cyclic form is scrapped easily by exposing to heat.

1. Identification of emulsion and latex

It comes from the Latin word "liquid" and was used to mean the liquid secreted from rubber trees. Latex refers to the state in which rubber fine particles are dispersed in water. It is also used for dispersion of synthetic rubber other than natural rubber, and it is also expanded to general synthetic resin, also called vinyl chloride latex.

Emulsion or latex is collectively referred to as [dispersion] and is called by magazines in the USA and Europe. For this reason, it is often called according to the traditions of each industry.

Synthetic resin emulsions have been used as adhesives from the very beginning of development, especially since they have excellent adhesion to hydrophilic porous materials and adhesion is one of the main uses of emulsions.
Representative is polyvinyl acetate (PVAc), which is currently used in large quantities with synthetic rubbers among various emulsion polymer products, adheres well to a relatively wide range of materials and adheres perfectly to fiber materials such as paper and wood. Among the PVAc used, woodworking and paper machine packaging are the most common.

It is then used to occupy a large part for the coating of construction floor materials or wooden bricks, fiber binders and insulating glass fiber mats.

Except for glue, the use of emulsion paint face, resin processing of textile products, binder for wallpaper coating and laundry glue is very diverse.